mClon: 3D printing and robotics to power the education of the future

Empodera.org talks to María Loureiro, Bernardo Álvarez and Miguel Gesteiro, technology teachers at Secondary Schools in Baiona and Vigo, and to Miguel Gesteiro, a Vigo-based maker. Together they have promoted mClon through the citizen technology lab A Industriosa. mClon is a low-cost educational robot that uses free software and hardware and can be assembled by anyone, adapting it to their purposes, needs or ideas. It is based on Arduino, so it can also be programmed with the Arduino IDE. It is a sufficiently versatile robot to be adapted to multiple educational levels, being especially suitable for working in Secondary Education and Baccalaureate.

Tell us how was it born and what is the philosophy behind mClon, the educational robot.

The idea arose from the need to be able to build and program a robot from scratch for secondary education levels, so that both the hardware (design, electronics) and the software (programming) could be worked on, and that it would be sufficiently economical to make it accessible. As we already had experience with mBot in the centres, we decided to make a clone with generic components and 3D printing but that could be programmed in the same way as an mBot or with any Arduino-compatible software. mClon is an mBot clone with free hardware and software.

“In order to democratize robotics, affordable and versatile equipment needs to be made available”

One of your objectives is to democratize robotics in the classroom, which must not be an easy task. How do you work with this project to bring it to schools all over Spain?

To democratize robotics, it is necessary to be able to acquire cheap and versatile equipment, so we are looking for a way to make a functional robot with generic components that can be easily found on the market. 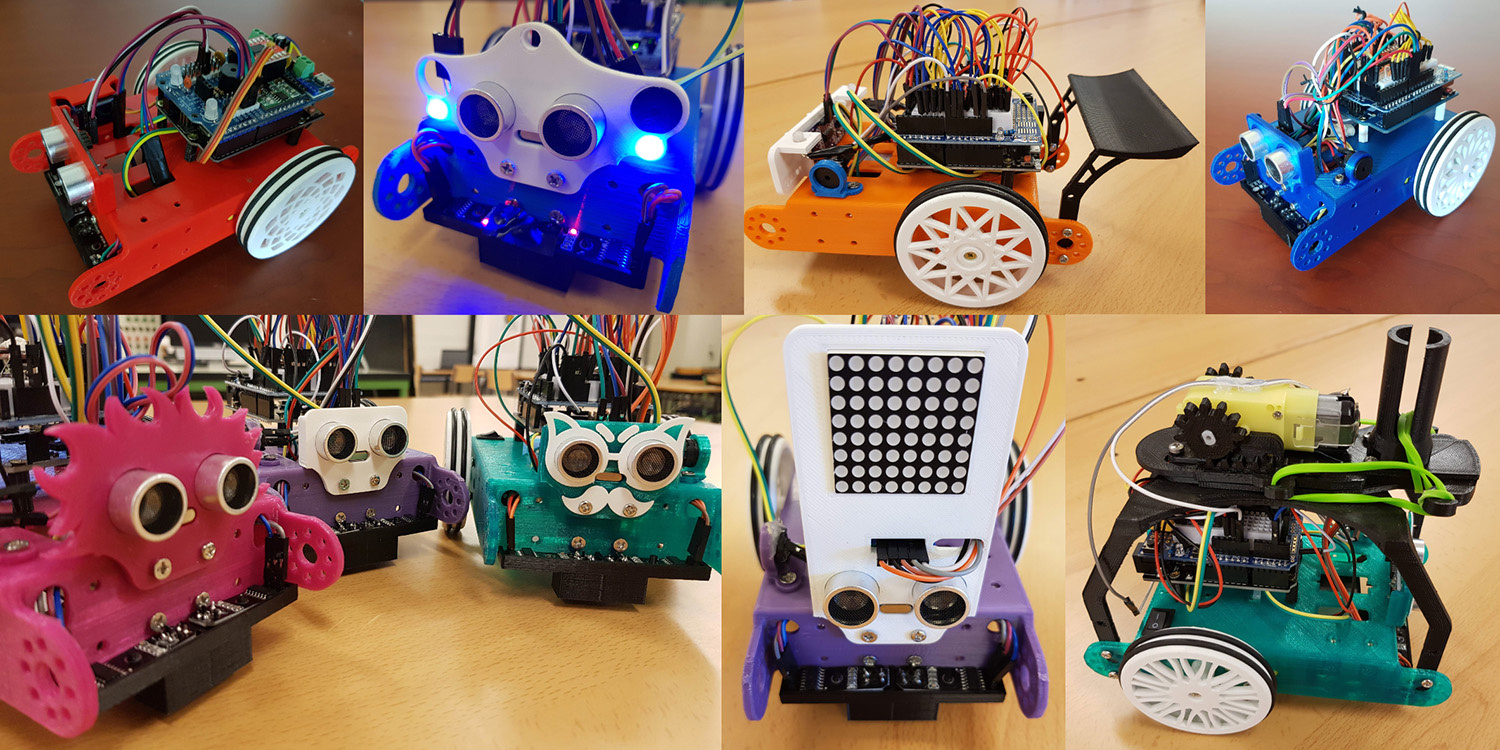 What improvements does mClon bring to other existing robots such as mBot?

One of the shortcomings we observe when introducing robotics in the classroom is that when commercial kits are used, only the programming is worked on, but not the hardware. We believe that in order to understand robotics, it is necessary to work on both the hardware and the software, otherwise the robot becomes a black box that obeys instructions, but without knowing what is going on inside it. At least in secondary education, we think it is essential to work on the physical part and not only on programming. The fact of designing your own parts for the accessories, assembling the mechanics, connecting the electronic circuit or introducing new sensors and actuators makes learning much more complete.

“Designing your own parts, assembling the mechanics, connecting the electronic circuit or introducing new sensors and actuators makes learning much more complete”

Can any student easily assemble their own robot? How does it work?

We have an assembly guide with lots of images to build the robot step by step, and then a series of function tests to check the connections in case something doesn’t work. But the most interesting thing is not to stay with the basic prototype, but to be able to experiment, adding other electronic and mechanical components to extend the functionalities or adapting the robot to what we want to do.

“The most interesting thing is to be able to experiment, adding electronic and mechanical components to extend the functionalities or adapting the robot to what we want to do”

We love the idea behind printable educational robots. How do you think 3D technology is changing education and technological skills in the classroom?

3D printing allows us to be able to design and manufacture a multitude of parts for our technology projects. The biggest advantage is that it is the students themselves who design or adapt the parts depending on what they need for their projects. 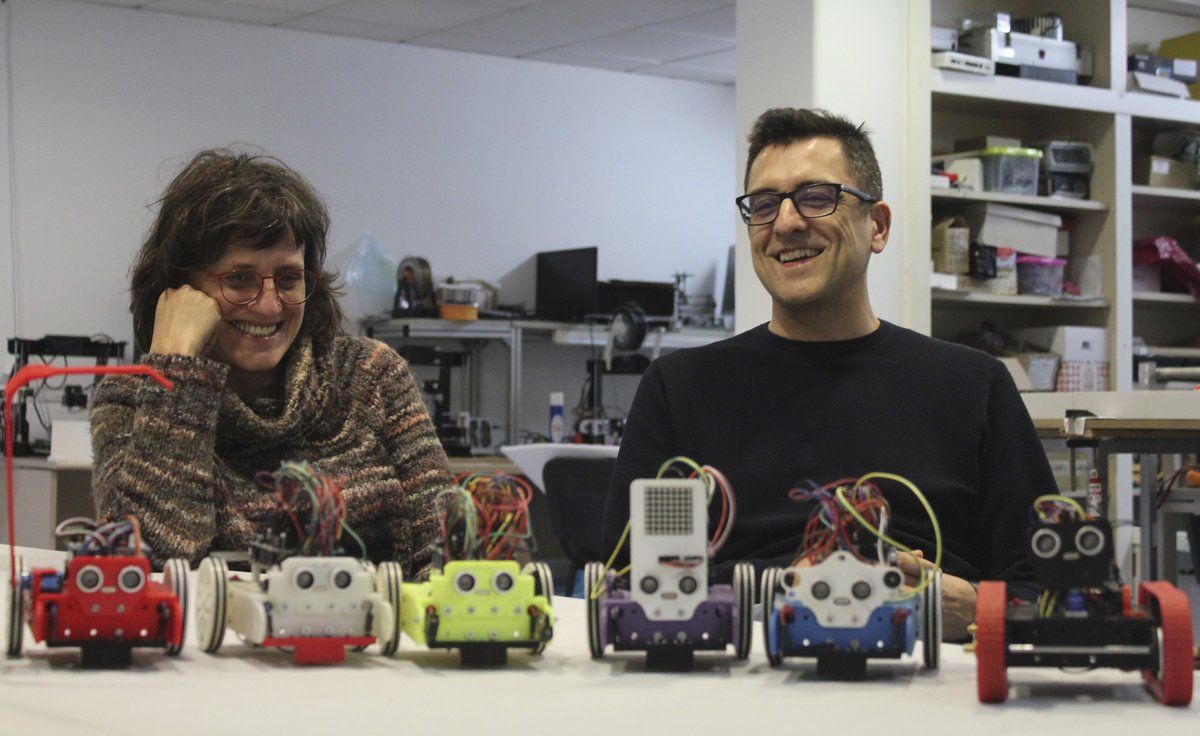 From your point of view, what does the current education system in Spain need to break with old methodologies and offer a real revolution?

There are no good or bad methodologies. Depending on what you want to achieve, some may work better than others. The important thing is that students learn and become interested in learning more. From my point of view, the most important thing is that students learn to solve problems and that they are able to create while using knowledge and logical reasoning.

You are part of the maker movement in Galicia, how has it grown in recent years and what other projects are you carrying out at A Industriosa?

In Galicia there are associations like Bricolabs in A Coruña that have been working very well for many years. In recent years other maker collectives have been born and one of them is A Industriosa, in Vigo. The association carries out different kinds of technological projects, there are teams that prepare robotics competitions and there are numerous informative talks and practical workshops.

Your educational initiative has crossed borders, reaching many schools in Latin America. How has this process been?

Well, it has been automatic. By publishing the material on the web and making it accessible to everyone, anyone, from anywhere, can join in. There is no barrier to this not being the case. 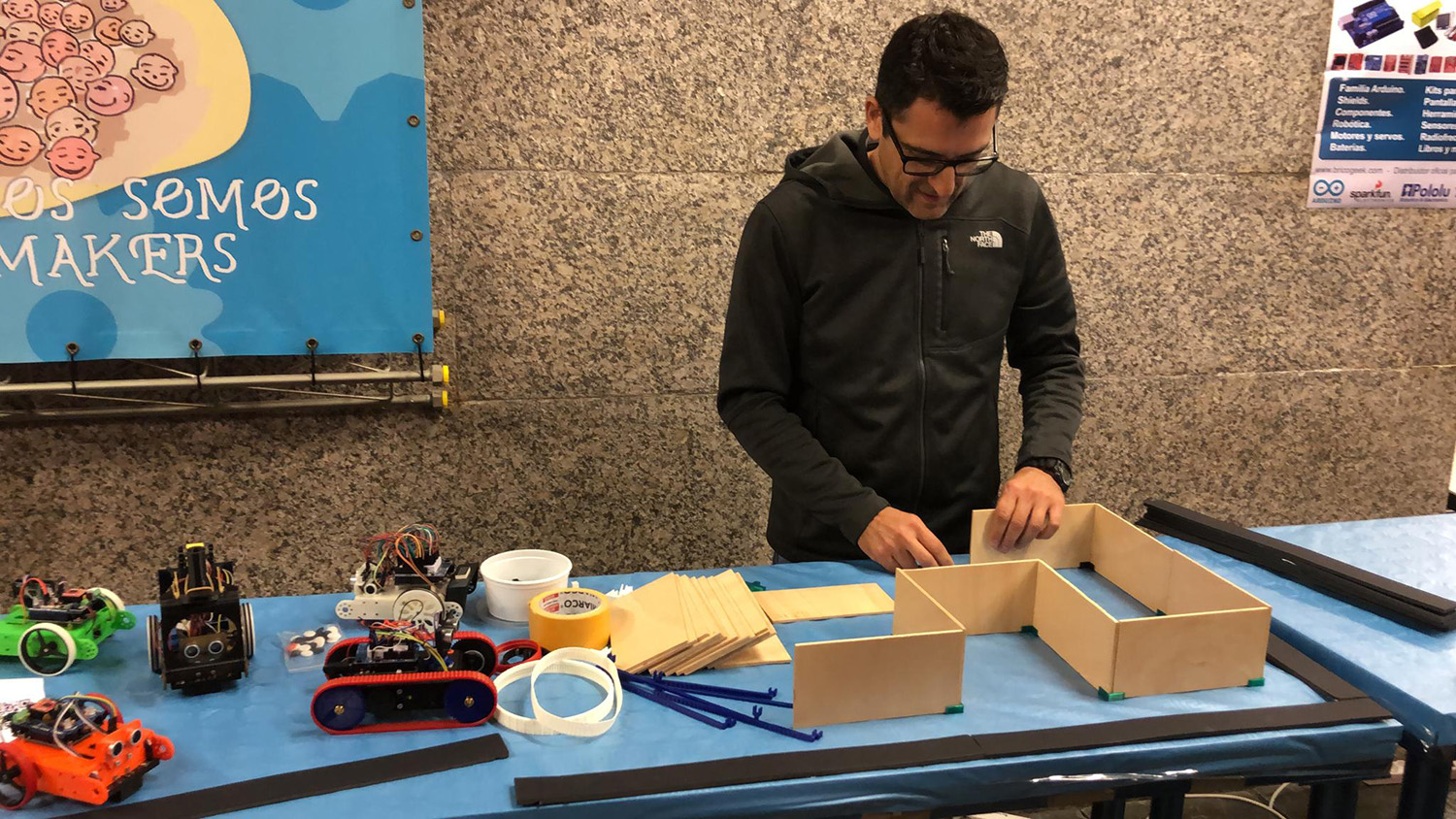 Can you highlight any experience with students who have worked with mClon? How do they react to the possibilities it offers?

The most remarkable thing is the involvement and work of the students. When they assemble the robots from scratch, with their own designs, they feel it is their own and they get much more involved in the work, as it is their creation. Although they also like it, it is not the same as working with a commercial kit that is already assembled, the difference is enormous.

What did winning one of the Xunta de Galicia’s “STEM Challenges” awards mean to you?

The truth is that it is appreciated that this project is valued and recognised. Many hours were invested in getting it off the ground, documenting it, disseminating it, and the involvement of the students in the process was also essential as it gives meaning to all the work. The fact that students in secondary school participate in a free hardware and software project helps to raise awareness of this world and to get them involved in the future.

More information about A Industriosa:

Get the latest articles, interviews and videos in your inbox

The cookies used in this website are categorised, and you will learn about each category further below. You will be able to enable or disable some or all of the cookies by category. When you disable a category that was previously enabled all the cookies assigned to that category will be removed from your browser. Additionally, you can see the list of cookies with all their details in the Cookies policy.

They are those strictly necessary for the proper functioning of the website and the use of its different options and services it offers, including the cookies used for the operational management of the site and for enabling all its functionality. For instance, those used for session and response time management, performance, option validation, security elements, social media content sharing, etc. The website cannot be fully functional without these cookies enabled.

They allow to track and analyse user behaviour on a website. This website uses the services of Google Analitycs and Matomo to perform these analysis.